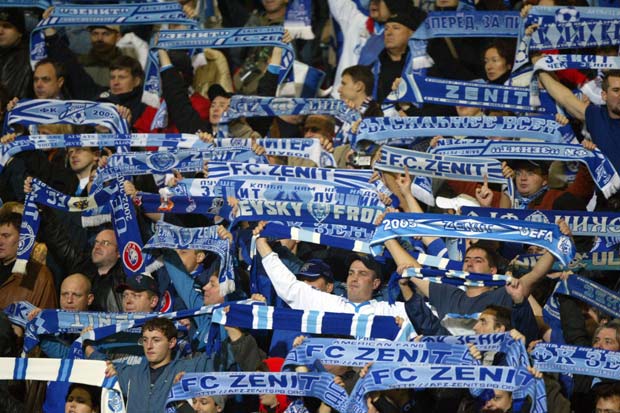 St. Petersburg, or Leningrad as it was known during the Soviet Union, has always been seen as the cultural capital of Russia. Tourists would descend on the city’s world famous museums and architectural sites. While the Camp Nou and San Siro are must see destinations for any visitors to Barcelona and Milan. The same couldn’t be said of the Petrovsky Stadium in Russia’s northern capital.

Petrovsky Stadium is the home of Zenit, a club with the backing of a city of almost five million inhabitants. A club that for years but failed live up to their local supporters’ expectations. They won just one Soviet league title in 1984 and a Soviet Cup 40 years earlier.

In contrast, the last five year’s has seen the club win the Russian Premier League title on three occasions, as well as the UEFA Cup and UEFA Super Cup. So what has been the secret behind the club’s rapid transformation?

It doesn’t need a rocket scientist to work out that money has been the major factor in helping to turn Zenit into one of the best club’s in Eastern Europe. In 2005, energy giant Gazprom bought a controlling stake in the club and the company embarked on a spending spree, which saw the likes of Danny, for a then Russian transfer fee record of €30 million, join the St. Petersburg outfit.

This rags to riches story has enraged opposition fans and led to calls that Zenit, especially with through their connections with Gazprom, are looked on favourably looked upon by Russian Football Union.

Successful clubs are always accused of getting preferential treatment, but these are accusations usually based on the jealousy of rival supporters rather than having a grounding in hard fact.

And such is the case when looking at Zenit St. Petersburg. Love them or hate them and their monied owner, it is difficult to find multiple examples of where the Russian government of the Russian Football Union has given the club preferential treatment.

There is one incident that does stand out. In 2009 Vladimir Bystrov was playing for Spartak Moscow, however during the middle of the season and with the Red and Whites challenging for the title, he was sold to rivals and his hometown club, Zenit. Head coach at the time, Valery Karpin didn’t want to sell the midfielder, however according to the Spartak boss, the president of the club, Leonid Fedun received a call from ‘upstairs’ saying that the club had to sell the player to Zenit. Bystrov promptly returned to play for Zenit and helped them win the league title, though it also must be pointed out that the Russian international also wanted to return to his home town club.

But one incident doesn’t substantiate a conspiracy theory and looking at other major issues of recent years years, the evidence appears to point to the Russian Football Union coming down hard on its most successful the club.

For example, Zenit were deducted three points after not fielding a player born after 1990 in a match against CSKA Moscow. And just three months ago, the reigning Russian Premier League champions forfeited their match against Dynamo Moscow after their goalkeeper, Anton Shunin, was struck by a flare, thrown from their own fans.

The fact that the club was hit with a points deduction is significant, as this would hurt Luciano Spalletti’s side considerably more than a multi-million dollar fine, given the financial backing the team has.

When looking at the problems of racism within Russian football, Zenit fans have been culpable on a number of occasions, but again they are not getting preferential treatment due to connections with big business or the government. This is a Russian problem, not just a Zenit one.

A banana was thrown at Anzhi player Roberto Carlos in March 2011, yet the side from St. Petersburg were fined a paltry $10,000. However, there was precedence for the level of the fine, as three months later a similar incident occurred in Samara, with the Brazilian once again on the receiving end. The home team, Krylya Sovetov, were fined the exact same amount.

These fines had nothing to do with Zenit getting favourable treatment, rather than the fact that the Russian authorities have yet to realize what a serious problem racism is within football within the country, and that there is a lack of tough legislation in place to tackle the problem.

In my view, supporters across Europe and Russia have a misconception about how powerful Zenit actually are in reality. Many point to the fact that Aleksey Miller, the chairman of Gazprom, has a keen interest in the running of the club.

Although Miller recently announced that the energy giant would continue to support the club to the tune of around $150 million dollars per season, externally he does not have too much clout.

The Gazprom chief is best known in recent months for being angry at the decision to strip Zenit of three points following the flare incident. So much so that he threw his considerable financial weight behind wanting to form a break-away league: “Very, very many people think that we could play in a CIS championship, and I am also a firm supporter of this idea,” he said.

But in Russia it is not necessarily all about money in this case. The ultimate decision is with FIFA and UEFA who have both looked at this possibility with a large degree of skepticism. The Russian federation appears similarly unmoved by the demands of Zenit’s owner.