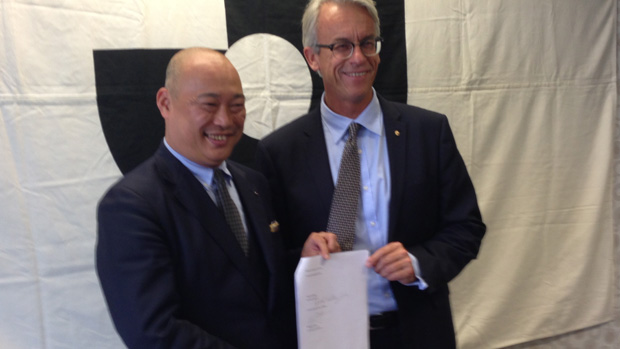 May 3 – The Hyundai A-League and Japanese J-League have signed a co-operation agreement which will see the two leagues share technical, marketing and administrative expertise as well as paving the way for more matches at elite youth level between Australian and Japanese clubs and encouraging loan deals between the leagues.

The agreement, signed by a Japanese delegation which arrived in Australia on Saturday, will also see joint marketing and promotion of AFC Champions League matches featuring Japanese and Australian clubs.

“The co-operation includes a commitment to use sports diplomacy to build on the relationship between the governments of Australia and Japan, including the business, expatriate and multicultural communities,” said a press release.

Football Federation Australia CEO David Gallop (pictured right) commented: “This deal brings two of Asia’s top football nations closer in a very meaningful way that will not just build relationships, but will have an impact on football development.

“The J-League and A-League are setting benchmarks in Asia and this is an opportunity to drive each other to even greater heights,” he continued.

“This aligns with our strategy to drive commercial revenues and audience growth in the A-League and build future generations of successful national teams.”

Managing Director of the J-League, Daisuke Nakanishi (pictured left), said:“Since last year, we had a number of meetings with Football Federation Australia and found that we have similar environment and visions.”

“Both the J-League and the A-League are still young and developing and we are both aiming to be world class competitions.

“Another note is Australia’s sporting culture. We found sometime after the 2000 Sydney Olympics that the sports industry had gradually grown and government policies on sports became very supportive.

“We will host the 2020 Olympics in Tokyo and it is our idea to benchmark FFA and the A-League, how they developed since their establishment, especially the cooperation with the government.”

Apparently unconstrained in his ambition, and perhaps with Leicester City’s unlikely triumph in mind, Nakanishi continued: “I am so excited to commence this partnership and hopefully one day, two teams from Asia, Australia and Japan, will meet in the World Cup Final.”