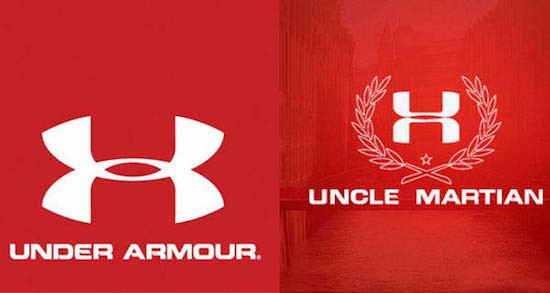 July 15 – Under Armour has moved aggressively in China to protect its brand from Uncle Martian, a low-end Chinese copycat of Under Armour, filing suit in the High People’s Court of Fujing Province.

With observers reckoning that Uncle Martian would back down after a lot of media exposure and some hard warnings from Under Armour, the dispute has gone to another level.

Under Armour has initiated legal proceedings against two companies related to the Uncle Martian brand in the High People’s Court of Fujing Province.

Uncle Martian uses a logo that is strikingly similar to that of Under Armour’s.  This has generated a lot of publicity and comments on both foreign and Chinese websites.  According to a blog by Shimin Law’s sports and entertainment practice: “Many Chinese expressed shame and shock in their online posts.  Some ridiculed Uncle Martian by uploading pictures and videos of the company’s staff telling lies about its products and its non-existing relationships with NBA players.

“In addition to injunctive reliefs, Under Armour is also asking at least 100 million RMB (approximately 15 million USD) in damages.  Simultaneously, Under Armour has taken administrative actions against these two companies in the Chinese Trademark Office and the Hong Kong Companies Registry.”

Shimin takes the view that Under Armour will win this legal battle.  “The company has valid trademarks, including the logo at issue, registered in Class 25 (clothing, shoes, and headwear) with the China Trademark Office.  On the other hand, Uncle Martian does not seem to have a registered logo.  Its only registered trademark in Class 25, the phrase of “Uncle Martian,” was revoked and the use was stopped for a continuous three-year period as of May 18, 2016.”

Nan Sato, a sports and entertainment lawyer in Shimin’s New York office, said that the ‘takeaways’ in this case are: “(1) Register your marks in China early and broadly; and (2) We might finally be approaching an era where internal consumer pressure is helping push blatant knockoffs out of the Chinese market.”