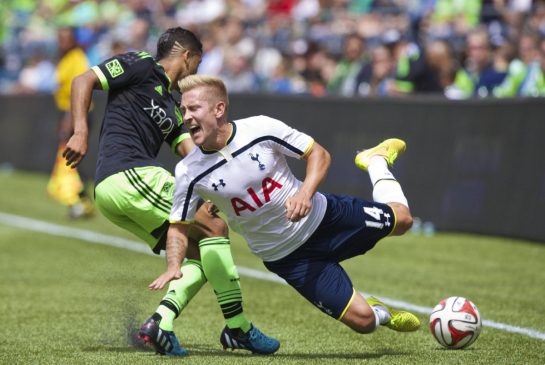 July 26 – Premier League Tottenham Hotspur have built on their pre-season tour to Australia with the signing of a three-year deal with Australian broadcaster Foxtel.

The broadcaster will air a weekly three-hour Spurs programme including the club’s matches, and will be scheduled by FOX SPORTS as part of their regular sports coverage and to existing sports pack residential subscribers. Content will also include features from the club’s video service.

Spurs have focused on building strong links in Australia with its Official Supporters Club, Oz Spurs, which has eight branches across the country.

The club visited Sydney in May, 2015, as part of their pre-season preparation and played a friendly match against Sydney FC at ANZ Stadium in front of 70,000.

They are currently back in the country to compete in the International Champions Cup (ICC) against Juventus, Atletico Madrid and Melbourne Victory. All matches are being played at the Melbourne Cricket Ground (MCG).

Aidan Mullally, Head of Business Development at Tottenham Hotspur, said: “We are delighted to announce a partnership with Foxtel. Tottenham Hotspur has enjoyed fantastic support in Australia over the past two years visiting Sydney and now Melbourne. We look forward to collaborating with Foxtel to bring our growing fan base exciting and engaging content via the programming block and Spurs TV features.”

Deanne Weir, Managing Director – Content Aggregation & Wholesale, at Foxtel, said: “This exciting arrangement with our new partners at Tottenham Hotspur furthers our continued commitment to Football in Australia. We are looking forward to providing Australian Spurs fans insights from the Club through the weekly three-hour programme block on FOX SPORTS. We look forward to working with Tottenham Hotspur over the next three years to further engage their fan base in Australia.”