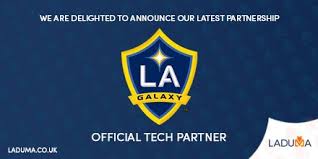 “The partnership, developed by AEG Global Partnerships, is designed to introduce fans to a new, multisensory way of following and experiencing the club – up close and personal – inviting fans from all over the world to briefly transport themselves to Los Angeles and StubHub Center to hang out with some of their favorite LA Galaxy players on and off the field,” said the club.

Included in the content build is a six-part series featuring six LA Galaxy players: Nigel de Jong, Ashley Cole, Gyasi Zardes, Jelle Van Damme, Steven Gerrard and Robbie Keane. Fans will be invited into the LA Galaxy dressing room on match day, “spend time with Gerrard at his home and see where Keane likes to hang out in Los Angeles when he isn’t scoring goals.”

The VR series will debut at two LA Galaxy home games in the 2016 MLS season with Laduma and the LA Galaxy inviting fans to watch the VR content at the StubHub Center.

The content will be available across all VR platforms through the LA Galaxy VR app – created by Laduma – and the Laduma website. Laduma and the LA Galaxy will also multi-purpose the content for high-definition 2D media.

The VR series will be an extension of the club’s 2016 ‘This Is LA’ campaign, which features lifestyle photography of the team’s players, staff and supporters throughout their home neighborhoods in and around Los Angeles.

Laduma chief executive officer Ben Smith said: “At Laduma, we pride ourselves on working with the most iconic brands in the world. The LA Galaxy are not only synonymous with style and success within MLS, but they are also widely respected for being one of sport’s most forward-thinking, digitally savvy organisations. And so our partnership is about creating incredible content for one of the most digitally engaged audiences in professional sports.”