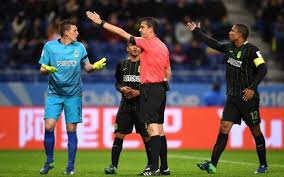 December 16 – FIFA’s new video review system, championed by those who have long argued goalline technology alone does not go far enough, has not got off to the most auspicious of starts.

Real Madrid on Thursday reached the final of the Club World Cup by beating Mexico’s Club America 2-0 but the review system was once again the main talking point after Cristiano Ronaldo’s injury-time strike.

The goal appeared to be ruled offside by Paraguayan referee Enrique Caceres before, in consultation with the video official, he eventually allowed it to stand.

“It’s a new system and I don’t like it very much. I think it can cause confusion and it wasn’t explained to us in much detail,” said Real midfielder Luka Modric. “My first impression was it’s not a very good system.”

The previous day, video evidence was used to award a penalty for the first time in official competition when Japan’s Kashima Antlers upset Colombia’s Atletico Nacional in the other semi-final.

Kashima benefitted after the video assistant referee (VAR) called the referee’s attention to a foul in the box by Atletico’s Orlando Berrio. The decision, and the time it took to reach it (45 seconds) proved contentious, not least because of a suspicious offside.

FIFA praised the ruling and now the International Football Association Board (IFAB), the sport’s law-making body, has emphasised that the technology was still at the testing stage even though Gianni Infantino, the FIFA president, is keen for it to be employed at the World Cup in Russia.

“Referees do not have to wait until the ball goes out of play – they can stop the game for a review as soon as the ball is in a ‘neutral’ area i.e. when neither team has a good attacking possibility,” said David Elleray, IFAB’s technical director and one of the world’s most recognised former referees.

“But we have to remember that this is the first experience some of these referees have had with video assistance.”

“Checking replays, communication between the officials and then the review itself can take time when it’s a completely new situation for them,” said Elleray.

“With further training for those taking part in the live trials around the world…we should see the speed of the review process continue to improve.”

Leagues in 12 countries have confirmed they will participate in a two-year experiment with VARs but Real coach Zinedine Zidane is not impressed.

“If you ask me my personal impression it can cause confusion,” he was quoted as saying by Reuters. “We don’t have the power to decide. If that’s decided, then we need to get used to it.”