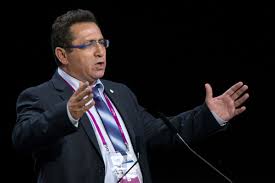 March 28 – The impasse over football’s Middle East crisis has taken another divisive twist with FIFA reportedly backing the Palestinian cause to the fury of Israeli officials.

FIFA has been at pains, until its congress in May, not to reveal the details of last week’s behind-closed-doors meeting between its chief mediator in the region Tokyo Sexwale and the two respective federations over the thorny issue of Israeli clubs based in the occupied territories.

But according to agency reports, Israeli FA chief Ofer Eini (pictured) was furious when Sexwale threatened to suspend Israel from all international competitions – exactly what the Palestinians have long sought – unless the six teams in question are disbarred for breaching FIFA statutes.

After a stand-off reportedly lasting several hours Sexwale appeared to back down, says AFP, offering to delay any final decision until the FIFA Congress in May and opening the door to continuing negotiations. FIFA has said only that Sexwale presented a “draft final report containing specific recommendations.

Palestinian FA boss Jibril Rajoub said Sexwale’s stance, even it was retracted slightly, proved what the prevailing mood was.

“There is a clear dimension of the violation — either of human rights or the UN resolution, or the FIFA statutes,” he said. “I hope that the Israelis will understand it’s time for them to correct their violations and abide with international law.”