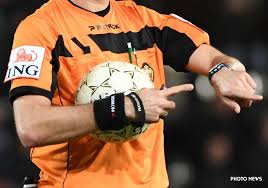 April 28 – The Belgian FA (KBVB) has offered eight referees a two-year semi-professional contract in a move to modernise and upgrade refereeing in Belgium.

As of the 2017/18 season eight referees – Sébastien Delferière, Bart Vertenten, Alexandre Boucaut, Jonathan Lardot, Erik Lambrechts, Lawrence Visser, Nathan Verboomen and Bram Van Driessche – will enjoy fixed training sessions on Tuesday and Thursday at the Belgian Football Center in Tubeke as part of their semi-professionalization. They will receive a monthly salary and an insurance policy against long term injuries.

In the future the number of semi-professional referees will be increased to 12. The Belgian FA’s roadmap outlines an enhanced presence of Belgian referees in Europe and offer them a way to the continental top table. By 2020 the KBVB wants a stong representation in Europe.

“There must at least be one [Belgian] referee at the elite level of UEFA,” said former Belgian referee Frank De Bleeckere.

“Those referees are eligible for matches in the Champions League and the European Championship and the World Cup. We must fill that gap that’s been in Belgium for six years. That must be our greatest target. We are on the right track with the support that we are giving to our referees.”