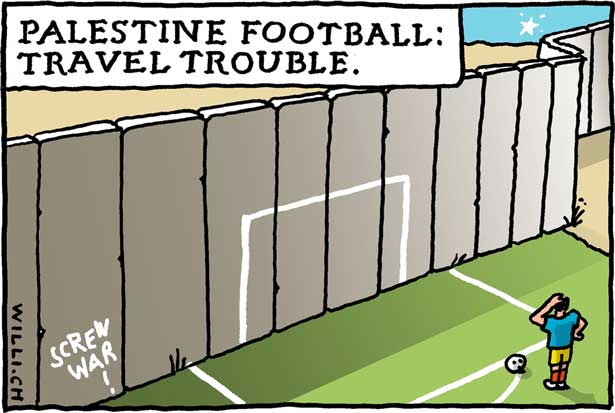 May 5 – The pressure on FIFA to resolve the Israeli-Palestinian impasse at next week’s Congress is being racked up – with factions supporting both sides calling for an end to the festering dispute.

The Palestine Football Association (PFA) has long maintained that the presence of the six Israeli clubs on its territory is in breach of FIFA statutes. FIFA rules forbid a member association playing on the territory of another member association without permission. Israel counters that this is inapplicable since the Palestinians do not have permanent borders but the UN Security Council recently reaffirmed the unlawfulness of settlements and called on third parties not to give them legal validity.

Sexwale’s committee looks set to set to postpone a final decision once again in Bahrain by giving Israel six months to discontinue playing matches in the occupied West Bank. But at the same time, the Palestinian Football Association is understood to have tabled its own proposal to be voted by Congress, aimed at ending the status quo.

In a letter to Samoura and Sexwale, whose credibility is on the line since his mandate expires in Bahrain, Human Rights Watch have warned that maintaining the status quo in the region and thereby flouting its own rules would have “long-term negative repercussions” for FIFA’s image and say the only solution possible is ordering the Israeli FA to immediately stop its clubs from playing in the occupied territories.

Meanwhile, over 170 sports clubs in the occupied West Bank have called on FIFA to suspend Israel’s membership if the matter is not resolved satisfactorily.

In correspondence sent to Infantino, FIFA Council members and all member associations, the clubs request FIFA “to ensure that the Israel Football Association (IFA) exclude Israeli teams based in illegal settlements in the Occupied Palestinian Territory from its leagues, and suspend the IFA from FIFA if it refuses to do so.”

“The FIFA Monitoring Committee, which was established two years ago with the aim of improving Palestinian football, has failed to meet its goals.”

“The harassment of Palestinian footballers, the deliberate obstruction of our right to movement in the occupied territory denying us the ability to attend training sessions and matches are well documented. The IFA continues to violate FIFA’s statutes by sponsoring teams based in illegally occupied Palestinian land.

“FIFA’s persistent delays in making a decision on this matter gives the impression that FIFA isn’t serious about the protection of our human rights, or respect for its statutes. It shows that FIFA is putting politics ahead of human rights by giving Israel a free pass.

“We are concerned about reports that FIFA will give the IFA a ‘warning’ period of six-months to exclude settlement teams, without specifying the course of action if it fails to do so. We question the necessity of the six-month extension and view it as a continuation of FIFA’s delays in making a decision on this clear violation of FIFA’s statutes.”

While the Palestinians have clearly adopted the moral high ground, by no means everyone agrees with their stance.

In a counter letter to Infantino, a cross-party group of German lawmakers say FIFA should reject Palestinian demands to sanctions Israel

The grouping says PFA chief Jibril Rajoub’s continued attempt to throw Israel out “shows he is misusing the sport for his own personal ideology.”

“It is important that FIFA recognize that the entire Palestinian- Israeli question should be examined as a political whole whose solution cannot be a function of sport,” they said.

“The glorification of terrorism by the use of racism, antisemitism and discrimination of Israel’s teams undermines the sustainability of the FIFA statutes that call for a fair and peaceful sport.”

The German deputies conclude their letter by urging FIFA to deliver a “clear rejection” of Rajoub’s efforts to oust Israel.  “Sport should not be misused as a political game.”