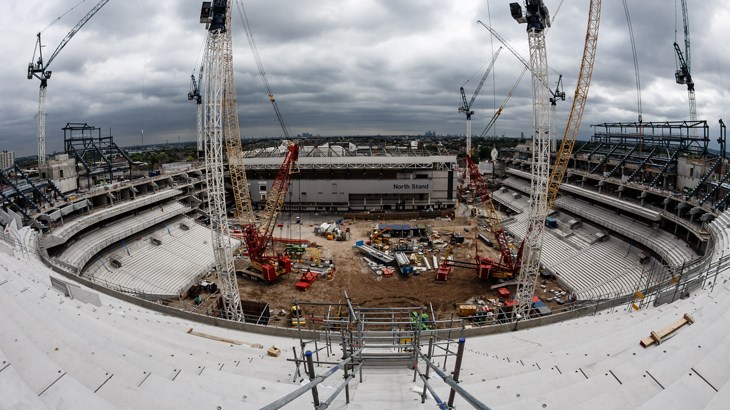 June 1 – Premier League Tottenham Hotspur have agreed a £400 million five-year bank loan to support the construction of the club’s new 61,500 seat new stadium. The facility is being provided by Bank of America Merrill Lynch, Goldman Sachs and HSBC Bank.

Spurs have already spent £340 million from their own resources “on the acquisition of land, the planning process (including a compulsory purchase order and legal challenges) and build costs to date, which now sees the upper tiers of the North stand being fitted with terracing,” said a club statement. The stadium will be the second most expensive football stadium to be built in the UK after Wembley.

The new £400 million loan is replacing a £200 million interim financing facility from the same banks of which £100 million has been drawn down.

The club said that: “The remaining costs of the project will be funded from the Facility and the Club. In addition, the ENIC Group will also commit to a £50m letter of credit facility to support the stadium financing and ensure the project is fully funded through the course of its build.”

The financing is secured by the new stadium and related commercial and match day revenues. There are no early repayment penalties or amortisation requirements on the loan and no material financial covenants until the stadium opens.

Matthew Collecott, Tottenham Hotspur Director of Finance and Operations, said: “We are delighted to have three of the most prestigious and globally recognised banks supporting us. We look forward to continuing our relationship with them and our main contractor Mace as we move into the final stages of our journey to deliver the catalyst to one of London’s largest regeneration projects.”

Spurs have been playing at a reduced capacity White Hart Lane for the past two season, playing their Champions League fixtures at Wembley. Next season the club will move to Wembley for all matches in what was initially hoped would be a one season deal, but now looks more likely to be for two seasons.

The new financing arrangements will mean that there will be no impact on the finance required for the playing side as manager Mauricio Pochettino looks to build on the club’s second place league finish and establish the club as a credible force in the Champions League after two seasons of flattering to deceive in the competition.

The KPMG Football Benchmark Enterprise Value report which looks at the value of Europe’s top 32 clubs, noted Spurs as significant in their moving up the ranking. In tenth spot, the club has overtaken Paris St Germain with a valuation of between €978 million and €1.044 billion. A fast and rapid jump for the club as it seeks to establish itself amongst Europe’s giant clubs.