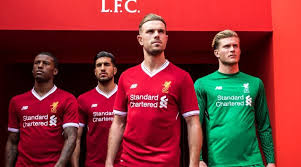 August 25 – Philippe Coutinho might be the only asset in Liverpool that isn’t selling at the moment. The club has announced that it has already sold out of some replica kit items while Irish airline Ryanair has said that its selling out of seats to Liverpool and Manchester on match days.

The 2017/18 kit has been the most popular kit in Liverpool history. The New Balance commemorative kit celebrates the club’s 125 year history with its retro styling.

The club is scrambling to fulfil demand but has had to open up a pre-order system has been opened, ahead of the stock replenishments that will arrive in store this October. New stock will come available from October 16.

While the club is replenishing its shirt stock, Ryanair has announced it will be laying on extra flights on match days to ship live stock to Liverpool and Manchester.

Fans will be able to pre-order for the next delivery of 2017/18 home and training kit which is due to arrive in LFC stores mid-October.

The airline will run two additional flights and reschedule two others for Liverpool and Manchester United fans coming over from Ireland to attend Premier League fixtures in October and November.

An extra matchday flight will depart Dublin at 8:15am on Saturday October 14 for the Liverpool and Man United game at Anfield.

Another extra service is scheduled for Saturday October 28 for the clash at Old Trafford between United and Tottenham, followed by a rescheduled evening flight departing Manchester Airport at 5:20pm.

The other rescheduled flight will depart from Liverpool John Lennon Airport at 10:35pm, following Liverpool’s match against Chelsea.