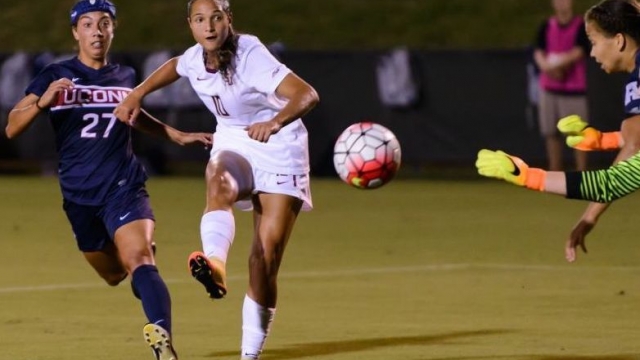 October 23 – A few hours before staging its glittering annual Best Awards ceremony, FIFA has come under attack for naming a little-known striker on its female player-of-the-year shortlist.

Former World Cup winner Megan Rapinoe of the United States says she cannot understand why Venezuelan teenager Deyna Castellanos, who does not play in a professional league, is on the list for tonight’s globally televised awards.

The other nominees are US midfielder Carli Lloyd and Dutch forward Lieke Martens – player of the tournament at Euro 2017.

“The award just doesn’t hold a lot of weight when you’ve got someone on the list I’ve never heard of,” said Rapinoe, who has 127 caps and won both 2012 Olympic gold and the 2015 World Cup.

She told the BBC the inclusion of rising star Castellanos on was patronising to the women’s game.

“It signals to us and it signals to the rest of the world that Fifa doesn’t really care,” she said. “If some random male player, who was not even a full professional, was nominated, I’m sure they would step in for that, so it’s disappointing that the same hasn’t been done for us.”

Castellanos plays for the Florida State university team and has never represented Venezuela at senior or even under-20 level.

The awards recognise performances between November 2016 and August 2017 with winners to be announced in central London.

Castellanos, who grew up idolizing Brazilian legend Marta, told the BBC she was surprised to be nominated. “I couldn’t believe it. I was so emotional.”

Rapinoe, who plays for Seattle Reign, says FIFA is promoting potential in the women’s game instead of rewarding recognised top players. Conspicuous by their absence from the shortlist are Australia forward Sam Kerr, who became the all-time leading scorer in the National Women’s Soccer League in the United States, and England striker Jodie Taylor, top scorer at Euro 2017.

Rapinoe says the shortlist is indicative of an organisation that is “old, male and stale” even though, to be fair, two of the nominees are among of the biggest names in women’s football.

Nominated for the men’s award are, predictably, Lionel Messi, Cristiano Ronaldo and Neymar.