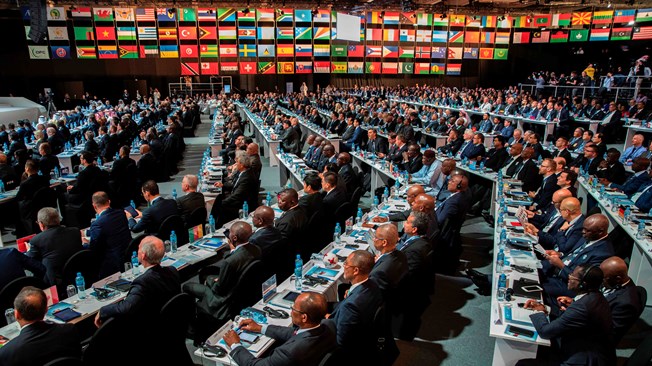 June 12 – The vote for the 2026 World Cup may take centre stage at Wednesday’s FIFA Congress in Moscow but not for the first time the crisis in Middle East football is giving the FIFA hierarchy one gigantic head-ache.

Angry and frustrated  at what they perceive as having been obstructed at virtually every turn in their efforts to force FIFA into taking action against Israel for perceived injustices in the occupied territories, a highly contentious proposal has been placed on the agenda by Palestine and its allies calling for approval of an amendment to the rules that would suspend a member federation for human rights violations.

Currently article 3, approved as part of a range of reforms back in 2016, states that FIFA “is committed to respecting all internationally recognised human rights and shall strive to promote the protection of these rights.”

But Palestinian authorities say this has not gone nearly enough and have written to FIFA general secretary Fatma Samoura  informing her of their intention to put to the vote an amendment that would harden it up.

The wording of the proposed text, signed by the Palestinians and several other countries and seen by Insideworldfootball, wants the relevant article to add the following provision:  “…Failure to recognise, respect, protect, guarantee and defend human rights in accordance to international standards as well as any violation of them is strictly prohibited and punishable by suspension or expulsion.”

It is understood that FIFA hierarchy have repeatedly urged the Palestine Football Association to withdraw the item which, while clearly directed at Israel, could technically apply to any other FIFA members who  might be accused of human rights violations. But having acquiesced to FIFA demands in the past in terms of sanctioning Israel, the Palestinians are in no mood to do so again.

“The defence of Human Rights can’t be based on statements or good intentions, it also needs to include a measure of deterrence to ensure the prevention of any deviation from the general purpose of article 3 of the FIFA Statutes, and to effectively protect the rights enshrined in said article,”  says the letter to Samoura.

“We consider that FIFA´s commitment towards Human Rights needs to be expressed more concretely within the FIFA Statutes through a provision that clearly states the consequences of violating these rights.”

Gonzalo Boye, a lawyer representing the Palestinians, told Insideworldfootball:  “Up to now there has just been a statement of intentions, nothing more. FIFA don’t want to make any revised article enforceable but as it stands now no-one can be punished.”

While the proposal seems certain to be voted down – if it even gets that far which is doubtful – the Palestinians say FIFA needs to show greater mettle.

“It seems no-one cares about human rights,” said Boye. “Why are they so nervous about such a small change? Maybe it’s because they are worried about other members not complying with international human rights. It’s amazing that FIFA, a special organisation, is opposed to a sanction process. We know it could affect even us but if we are not allowed to be heard, we will go to the Court of Arbitration for Sport.”