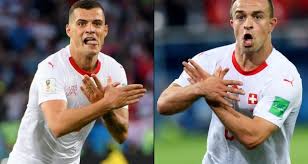 June 25 – FIFA has begun disciplinary proceedings against two Swiss players over their highly sensitive goalscoring celebrations that infuriated Serbia during last week’s clash between the sides.

Granit Xhaka and Xherdan Shaqiri, who have spent virtually their whole lives in Switzerland, have ethnic Albanian heritage and roots in Kosovo and made gestures that appeared to imitate the double-headed eagle on the Albanian flag.

FIFA outlaws all political messages or symbols in stadiums and the two players could be banned for up to two games if they are found to have breached the rules.

Kosovo, a former Serbian province, declared independence in 2008 but Serbia does not recognise this, and relations between the two countries remain tense.

Stoke’s Shaqiri, who was born in Kosovo, said his celebration in the Kaliningrad stadium was “just emotion” while Arsenal ace Xhaka, whose Kosovo-Albanian father Ragip moved to Switzerland in the 1990s to escape the local civil war, screamed “Kosovo” when he scored. Xhaka’s brother plays for Albania’s national team.

The Serbs, who want both players kicked out, reportedly complained to FIFA before the game about the Kosovo flag on one of Shaqiri’s boots. “We sought that he change the boots. It was a provocation, we were playing against Switzerland, not Kosovo,” team official Jovan Surbatovic told Serbian state-run broadcaster RTS.

Shakiri, who left Albania when he was four years old, told the Players’ Tribune website: “I feel that I have two homes, it’s that simple. Switzerland gave my family everything, and I try to give everything for the national team. But whenever I go to Kosovo, I immediately have the feeling of home, too. It is not something logical. It is just a feeling that I have in my gut.

“In 2012, when we played against Albania, I put the flags of Switzerland, Albania and Kosovo on my boots, and some of the Swiss newspapers were saying all kinds of negative things about it. I was criticised for it, but it’s crazy to me that some people feel this way because it’s simply my identity.”