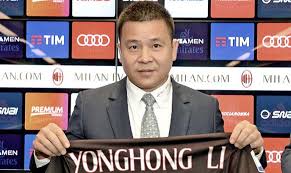 July 9 – AC Milan’s Chinese owner Yonghong Li has missed the deadline to repay €32 million of interest on the debt to US hedge fund Elliott Management which provided an estimated €335 million of the €740 million Li used to buy the club.

Under the terms of the loan, the missed payment means that Elliott could take control of the club which in turn would likely open up the possibility of a sale to new US investors.

Li has already turned down approaches from the Ricketts family, which owns the Chicago Cubs baseball team, and Rocco Commisso, an Italian-American cable television entrepreneur who owns the New York Cosmos.

According to the Financial Times Li turned down their interest because he was already to talking to potential Asian and Russian investors. Commisso is rumoured to have offered €500 million.

Selling the club now is unlikely to achieve the highest price for a club asset that many analysts believe was already over priced.

At the end of June AC Milan was handed a one-year ban by UEFA from European competition.

AC Milan had qualified for the group stages of the Europa League after finishing sixth in Serie A but UEFA said the club, which spent £200 million on transfers last summer after a takeover, breached rules around requirements for clubs to break even.

The club said it is appealing the UEFA ruling to the Court of Arbitration for Sport (CAS).

UEFA said AC Milan had not provided sufficient evidence of its financial stability. But before the verdict, AC Milan released a video on Twitter saying they expected “fairness, rulings based on facts and equal rules for all” from UEFA.

The statement said the club are “ready to pay for the errors made in the past” and “have the utmost respect for the rules, but we expect equality”.

With this uncertainty, Elliott Management may prefer to wait and attempt a management turnaround of the club in order to achieve a better sales price. The problem is that sales price is more influence by team performance and the ability to compete in the biggest competitions than it is by good management. However, UEFA would likely look more favourably on a management structure it believed could deliver the club a return to being within its financial fair play rules.