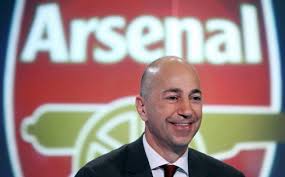 September 18 – After a protracted summer courtship, it has now been confirmed that Arsenal chief executive Ivan Gazidis is joining AC Milan, following manager Arsene Wenger out of the north London club and marking the end of an era.

Gazidis, vice-president of the European Clubs Association, will leave his role on October 31 to take over the same post at the Italian giants from December 1. He has been reportedly handed a significant increase on his £2.6 million a year salary and an equity stake in Milan that could prove to be worth millions more.

Raul Sanllehi will take on a new role as head of football at Arsenal whilst Vinai Venkatesham will be managing director. As a result, no new CEO is being appointed.

Josh Kroenke, son of majority owner Stan, said: “We will miss the wisdom, insight and energy Ivan brought to our club on a daily basis over the past decade.

“We are confident we have outstanding people in Raul and Vinai, and we look forward to working with them and coach Unai Emery to continue to move the club forward on and off the pitch.”

Gazidis joined Arsenal in 2009 and personally oversaw the appointment of Emery in the summer having previously worked with Wenger for almost a decade, frequently backing the Frenchman in public even when Arsenal’s fortunes began to take a dive after years of success.

But when Wenger left the club after 22 years at the end of last season, it soon became clear Gazidis was leaving too though not for the same reasons.

“Arsenal is entering a new chapter and I have done everything I can to ensure that it is strongly placed to take on that challenge,” Gazidis said in a statement.

“Although it is very hard to do – the hardest decision of my life – I believe that, after 10 years, it is the right time for me to step aside to allow new leadership, energy and ideas to take the club forward into this exciting new era. I believe in the positive force of change, both for me and for the club. I am excited to see what the future holds for this great club and I am energised by a new personal challenge with AC Milan.”