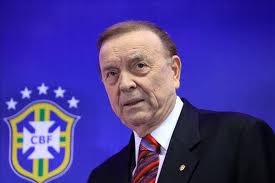 April 16 – Jose Maria Marin, disgraced former president of the Brazil Football Confederation (CBF), has been banned for life by FIFA and fined CHF1 million for taking bribes, 16 months after he was convicted of corruption charges in the United States.

Now 86, Marin was one of the key figures swept up in the FifaGate scandal that began with a series of high-profile arrests in May 2015 and brought football’s world governing body to its knees. More than 40 people and marketing agencies have pleaded guilty, been convicted or have been indicted and are still fighting extradition.

Marin, one of the original so-called ‘Zurich Seven’ arrested and a former member of FIFA’s executive committee, spent five months in detention in Switzerland before being extradited to the United States.

Last year he was sentenced to four years in a US prison after a court in New York found him guilty of taking nearly $6.6 million in bribes from sports marketing companies in exchange for contracts to broadcast major tournaments. He was also ordered to forfeit $3.3 million and pay a $1.2 million fine.

Marin, who was head of his country’s federation at the time of the 2014 world Cup in Brazil, was one of only three who have gone to trial for his part in what US prosecutors claimed was a $200 million global corruption scheme perpetrated by some of the most senior footballing figures. All the others who were indicted have pleaded guilty and have been sentenced or are awaiting sentencing.

Whilst Marin was never likely to return to football, his lifetime ban effectively confirms that his career is over, another powerful FIFA official to fall dramatically from grace.

“The investigation into Mr Marin related to various bribery schemes, in particular during the 2012-2015 period, in relation to his role in awarding contracts to companies for the media and marketing rights to CONMEBOL, CONCACAF and CBF competitions,” FIFA said.

“In its decision, the adjudicatory chamber found that Mr Marin had breached art. 27 (Bribery) of the FIFA Code of Ethics and, as a result, banned him for life from all football-related activities (administrative, sports or any other) at both national and international level.”