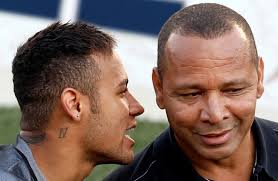 September 5 – PSG’s €200 million star Neymar Jnr could leave the club as early January for Barcelona, though more likely at the end of the season if PSG play him in Champions League matches before the Winter transfer opens.

Speaking at the Edinburgh Sports Conference, Neymar’s father, who runs the NR agency that controls Neymar’s image rights and acts as his agent, said “the negotiation between the clubs are not finished.”

Giving a presentation to predominantly sports lawyers on how he had managed Neymar’s career from being spotted as a preciously talented 6 year old by Brazilian club Santos, Neymar Snr said: “A Brazilian only wants to be where he is happy and he was very happy. When his friends (Barcelona players) asked him if he will go back (to Barcelona) this affected him.”

The problem with the transfer back to Barcelona, continued Neymar Snr, was that there was no contractual mechanism to trigger his contractual release.

“As agents we feel weak when there isn’t a structure to arrive and leave. There was no buyout clause (in the PSG contract) which made it very difficult. We fought to find a device to find something in common…We made everything as best as we could for him and what happened is probably the best.”

Even so, Neymar could still be back in Barcelona by Christmas, according to his advisors. A deciding factor could be how much football he plays for PSG before then and if he appears in the Champions League for PSG – effectively ruling him out of participation in that competition in the later rounds if Barca did secure a deal.

The deal apparently stalled around a suspicion that Barca didn’t have the cash to meet PSG’s €215 million asking price. Barca’s only written offer was €115 million in cash, €15 million in bonuses and three players –  defender Jean-Clair Todibo, midfielder Ivan Rakitic, and forward Ousmane Dembele on loan. Dembele refused to go out on loan.

There was also confusion from the selling parties at PSG with rumours that the Qatari owners had insisted he wasn’t to leave while the team management had initially seemed ambivalent to whether he stayed or went. What is clear from Neymar’s side is that he now expects to leave, and that is good for business.

Delegates at the Lombardi Associattes-organised conference, heard how Neymar Jnr’s career has been shaped by his father, predominantly in response to his own professional career “at small and medium sized clubs. I suffered from a lack of support and retired without any savings. I wanted to help my son and not allow him to go through the same problems I had.”

At the core of the strategy for his son – who from the age of 12 was attracting interest from major Brazilian and international teams, including Real Madrid – was allowing Neymar Jnr to develop his undoubted talent unencumbered. This meant protecting him from preying clubs and agents.

In 2010 this was extended when it was time to sign his first professional contract. “The board of Santos presented Project Neymar and gave me 50% of the image rights of my son. He was not the best paid athlete in Brazil, but it was an excellent business,” explained Neymar Jnr.

Neymar Jnr committed to stay with Santos until after the 2014 World Cup with the image rights contracts financing that stay far beyond what a Brazilian football salary could deliver. In 2010 he earned $500,000 as his salary and $11 million in image rights that were split with the club. In 2011 his salary rose to $750,000 and the image rights business was worth $15 million. By 2013 his salary was $1 million and image rights

Then came the moves to Barcelona in 2014 and the world record €200 million switch to PSG in 2017. The financials of the Neymar story are much more than just a talented footballer selling his playing ability to the highest bidder.