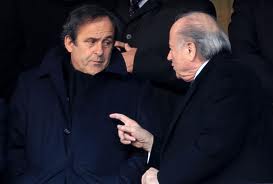 November 15 – Former FIFA president Sepp Blatter has hit back at Michel Platini’s claim that he voted for Qatar  to stage the 2022 World Cup, saying Platini’s recollection of events is “totally untue” and that he backed the losing United States bid.

In his recent book entitled Entre Nous to coincide with the end of his FIFA ban, Platini, the former UEFA president who for years coveted Blatter’s job as heir apparent but whose hopes were shattered when he was forced out of the game, suggested that Blatter – just like him – had voted for the victorious Qataris at the controversial ballot back in December, 2010.

But Blatter says this is nonsense and is understood to be considering legal action.

“It’s totally untrue what Platini has written concerning the election,” Blatter told Insideworldfootball through his official spokesman. “I have mentioned many times before that I did not vote for Qatar and went for the United States. Even the Qataris know this. I even provided this information to the Swiss attorney general.”

One-time professional colleagues, who were both banned as a result of the infamous “disloyal payment” of CHF2 million that Platini received for consultancy work in 2011 with Blatter’s authority, the pair subsequently fell out  and their relationship has soured further as a result of Platini’s surprise assertion in his book that Blatter favoured Qatar for 2022.

Some believe it may have been a deliberate move by Platini to deflect attention away from his own much-publicised vote for Qatar and put the pressure back on his one-time mentor.

But Blatter, whose own ban does not expire for another two years and who is still under criminal investigation in his native Switzerland, says everyone knows how he voted.

As the war of words with his former trusted adviser turned adversary  escalated, Blatter, now 83, added:  “I have no clue why Platini would say a thing like this. As I say, it’s completely untrue.”