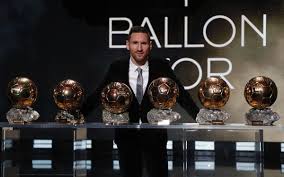 December 3 – Lionel Messi is football. At least he is when it comes to award ceremonies with the Argentinean last night picking up a record sixth Ballon d’Or, edging Liverpool defender Virgil van Dijk by a mere seven points.

The Dutch defender had widely been tipped to win the award and become the first defender since Fabio Cannavaro in 2006 to clinch the Ballon d’Or, but in the end Messi prevailed with van Dijk finishing second and Juventus forward Cristiano Ronaldo taking third spot.

The prestigious award is voted for by journalists from around the world and they rewarded Messi for another consistent season in which his everyday excellence stood out at FC Barcelona. Messi won the award for the first time in 2009. He had not won the coveted ball since 2015, but can now boast one more title than arch rival Ronaldo.

“Today is my sixth Ballon d’Or,” said Messi. “It’s a completely different moment, lived with my family and my children. As my wife said, you must never stop dreaming but always work to improve and continue to enjoy. I am very lucky, I am blessed. I hope to continue for a long time. I realise that I am very lucky, even if, one day, retirement will ring. It will be difficult. But I still have beautiful years ahead of me. Time goes very quickly, so I want to enjoy football and my family.”

Messi won his 10th La Liga title with Barcelona and became Europe’s top scorer for a third consecutive season. He started this season where he left off last, having scored nine goals already. At the weekend he netted the winner away to Atletico Madrid in impeccable style.