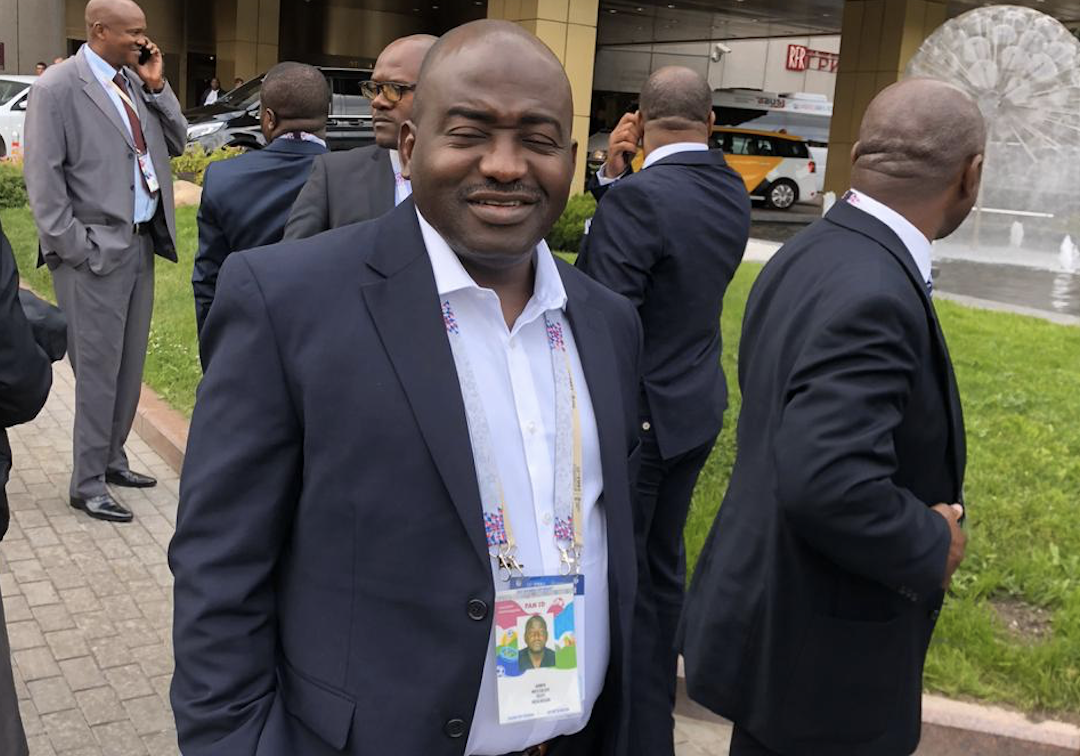 February 8 – Early reports of the independent audit of Confederation of African Football (CAF) finances for the period 2017 to 2019 looks likely to be the long overdue dynamite that explodes both the term of CAF president Ahmad Ahmad, as well as many of his most trusted and protected lieutenants.

It is a report that former CAF executive committee member Musa Bility (pictured) says, in a hard hitting statement, “can only be compared to crimes against humanity.” He talks of the “daylight robbery of CAFs and Africans football future” with “tens of millions” being spent – largely in cash – without any supporting documentation.

He also points the finger at other African national federations who did not use the full extent of their powers to demand full accounts at the 2019 CAF General Assembly which, he says, would have shown that it was impossible to hide the unexplained spending of millions of dollars. “It is my firm belief that CAF General Assembly may have perpetrated a crime and dereliction of duty by accepting for such accounts to be brought before it in such a casual manner.”

Much blame is laid firmly at the door of FIFA, and its president Gianni Infantino, whose credibility he says is now in question for allowing “his trusted lieutenants and members of the FIFA Council to blatantly loot the organization… History will remember how Infantino went out of his way to use FIFA and it’s organs to protect the same people who have now slit the wrists of the African game.”

In more detail, Bility, who has seen a copy of the report, says: “Expenditure was incurred to pay for expenses of wives of CAF officials, funerals of family members and even a wedding of a daughter of a top CAF Exco official. The audit report, self-explanatory to anyone who reads shows manifest crime, money-laundering, theft, destruction of official supporting documents to cover their audit trail and abuse of office.”

Ahmad’s term of office at CAF has been controversial and at times brutal – politically, commercially and socially. He has politically removed anyone who challenged his authority, has spent CAF money as though it was his own, has been accused of multiple acts of corruption around the award of commercial contracts, as well as being accused of multiple counts of sexual harassment of women within the CAF organisation – women who have come forward and made complaints but which Infantino’s FIFA have unashamedly failed to act upon. The accusations of sexual harassment on their own should have been enough for FIFA to immediately suspend Ahmad pending investigation.

Insideworldfootball first broke the stories of Ahmad’s alleged corruption and sexual harassment allegations in March and April of 2019. The evidence was clear, the complaints were made to FIFA’s Ethics investigators, yet Ahmad and his henchmen continued pretty much unobstructed.

Bility is appealing a ban at the Court of Arbitration for Sport (CAS) by FIFA that was conveniently timed to remove him from CAF when he spoke out about Ahmad’s leadership and called for an independent financial audit. Bility was also critical of FIFA’s installation of General Secretary Fatma Samoura as General Delegate for Africa and the ‘illegal’ shift of power from Africa to FIFA’s Zurich headquarters – maintaining that it was a power grab that broke CAF and FIFA statues. It was a seizure of control of Africa and its football self-determination that left other confederations deeply uncomfortable and, in turn, questioning the statutes, the role of FIFA and its president, and their legality.

Bility’s statement is not the ranting of a bitter and twisted individual though certainly he has an axe to grind – as do many others where FIFA Ethics have seen their judicial powers result in a convenient political outcome. However, what Bility raises is multiple questions about the running of African and global football – issues of corruption, integrity and morality.

If the perception of CAF’s integrity is at rock bottom, then the blind-eye and the unequivocal protection the FIFA president and his executive have given towards the dealings and misdemeanours of Africa’s leadership damns the whole of the world’s governing body.

Such is the depth of corruption underlying Bility’s partial lifting of the lid of Price Waterhouse Cooper’s audit report, it begs the question of whether FIFA has really progressed with its reforms to a better place following the seismic US Justice Department indictments in 2015 of FIFA’s elected officials. The FBI investigated that scandal under the Racketeer Influenced and Corrupt Organizations (RICO) act. At the time it never convincingly found a head of the ‘mafia’ organisation, the big boss. A new look at FIFA might find it easier to find one and an indebted supporting cast, such has been the trail of destruction CAF and FIFA has brought to the integrity of Africa and the game’s global governance.

Bility urges “FIFA to publish this audit in its entirety and take appropriate action where necessary. The cover up must stop now for the sake of AFRICA, the continent that Infantino claims to love so very much.”

For all that it has given him, Infantino probably doesn’t like Africa quite so much at the moment.

Click below to see the full Musa Hasan Bility statement: