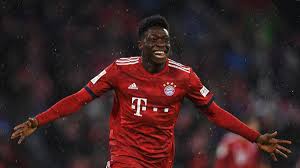 Such has been the emergence of Canadian teenager Davies that his transfer value has rocketed into the top 10 of most valuable players in Europe, ranked 9th and valued at €133.5 million.

That in turn is driving increased Canadian attention to German football. The DFB-Pokal final games will be aired live and on-demand at no charge on OneSoccer platforms.

Davies joined Bayern from Vancouver Whitecaps in 2019 and has scored twice added an assist in five appearances since the Bundesliga returned to play last month.

Bayern are chasing yet another double winning season, being seven points ahead in the Bundesliga and chasing their eighth consecutive title. They facing Eintracht Frankfurt in the cup semi-final tonight, a competition they have won 19 times. The winners will face Bayer Leverkusen in the final on July 4.

OneSoccer was launched by Mediapro Canada in April 2019 to carry live coverage of all Canadian Premier League matches, the Canadian Championship and the home matches of the Canada Soccer’s Women’s and Men’s National Teams. It also broadcasts weekly matches from LigaMX, as well as coverage of the Chinese Super League, and Spain’s top-tier women’s league, the Primera Iberdrola.