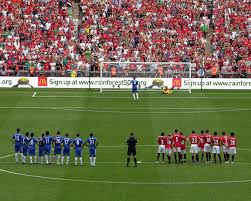 August 4 – With both the Europa League and Champions League resuming this week, UEFA’s chief refereeing officer Roberto Rosetti has explained the amendments to football’s laws of the game in greater details.

On Wednesday, Inter Milan and Manchester United will be among the clubs in action in the Europa League and on Friday both Juventus and Real Madrid will seek to overturn first-leg deficits in their round of sixteen ties in the Champions League.

Those matches, along with the Women’s Champions League, the Youth League as well as for 2020/21 club competition qualifying games will be subject to the amendments to the laws of the game, mainly law 10 and law 14, which the International Football Association Board (IFAB), the game’s lawmakers, sanctioned and came into effect on 1 June 2020.

The new application of Law 10, which deals with penalty kicks, means that goalkeepers are no longer booked for a first offence.

“In particular when the goalkeeper saves the kick [by encroaching], it’s not a caution for the first offence, but [the keeper] must be cautioned for any further offence,” explained Rosetti.

“Most goalkeeper encroachment results from a mis-anticipation from the goalkeeper and small offences are now detected more with the technology, with the video assistant referee.”

The amendment to Law 14 signifies that players will no longer carry a booking into a penalty shootout if one were required to decide a game.

“This would be more likely to occur now with VAR, and the goalkeeper can be penalised more than other players. We think that this is a good, important change.”