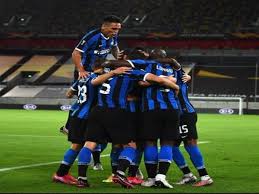 August 18 – Inter Milan set up what should be an intriguing climax to the Europa League against five-time champions Sevilla after thrashing Shakhtar Donetsk 5-0 in Monday’s second semi-final.

Inter, sprinkled with ex-Premier League players looking to further their careers, dominated their underdog Ukrainian opponents on chances if not on possession as they reached their first final of any description for nine years.

Argentine striker Lautaro Martinez and Belgian Romelu Lukaku both struck twice – the latter has now scored in 10 consecutive Europa League games – as Antonio Conte’s rejuvenated team moved closer to their first silverware since the 2011 Coppa Italia having missed out by a solitary point in last season’s Serie A campaign.

“It’s an incredible night, the kind we dreamed of. It has been a long time since I had played such a match and we have shown that Inter are ready for the big matches,” said Martinez. “We are a team that is growing day by day, there are both young and experienced players.”

If things had turned out differently, Lukaku could be facing former club Manchester United, where he was surplus to requirements, but Sevilla wrecked that prospect by beating United in Sunday’s other semi-final.

Inter will have a day less to prepare for their first appearance in a European final since winning the Champions League under Jose Mourinho in 2010.

Both finalists have already qualified for next season’s Champions League via their respective domestic campaigns and although his team will start slight favourites, Conte, who will be appearing in his own personal first European final as a head coach, knows Friday will be a tough affair.

“Many of our players are facing this kind of game for the first time in their careers,” said Conte. “Sevilla have great experience, they have won this competition several times. But we are ready to try giving a great joy to our fans.”