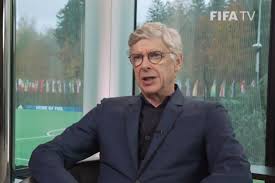 October 9 – With the rules of football under more scrutiny than ever – offside, handball, VAR etc – FIFA’s recently appointed Head of Global Development, Arsene Wenger, has come up with some forward-looking ideas he believes will improve the game.

Wenger was in charge of Arsenal for 22 years until stepping down in 2018 after 34 years in management and has been helping FIFA process the laws of the game, sitting on the International FA Board.

The Frenchman  would like to see the offside law altered, changes to corners and free-kicks, and ‘kick-ins’ introduced.

“For the moment, you are offside if a part of your body that you can score with sits ahead of the body of a defender. I would like it to be that there is no offside so long as a (single) body part which a player can score with is in line with the defender,” he told l’Equipe.

“This could be too much of an advantage for an attacker, because that obliges the defenders to play higher up.

“We are also considering other things: an in-swinging corner that goes out of play and comes back in could be made valid, this would create new goal scoring opportunities. There is also the option of quickly playing a free-kick to yourself.”

Wenger also wants to do away with throw-ins in the defensive half of the field.

“Five minutes before the end, a throw-in for you should be an advantage, but in these situations you are facing 10 outfield players in play, whilst you only have 9.

“Stats show that in 8 out of 10 of those throw-in situations, you lose the ball. In your half of the pitch, you should have the possibility to take a kick instead.”

Wenger also addressed the negative effect of goalkicks being played to defenders in their own box.

“I think that the new rule that allows you to play in the box from the start of play within 5.5m has profoundly changed play. I have to admit that I did not see it coming. This has consequences.

“The real playmaker now is the goalkeeper. And instead of looking to play as quickly as possible in the opposition half, you are looking to create space in your own box. This has created dangerous situations because teams press very hard, so well that they leave a lot of space.

“And this rule, which was innocent at the start, has profoundly turned the game upside down.”