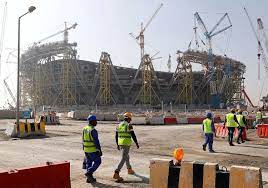 March 1 – Norwegian top flight clubs Tromso and Odds Ballklubb have urged their FA to boycott the 2022 World Cup in Qatar.

They made the call following the Guardian newspaper’s revelations that 6,500 workers have died at construction sites of World Cup stadiums in the Gulf country. Tromso declared that the workers find themselves in a system of ‘modern slavery’ and that for that reason it wants Norway to boycott next year’s global finals.

“The Guardian recently published a report of the deaths of a large number of foreign workers. The numbers are horrifying! The strategy that has been followed has not yielded the expected results and we think it is time to take the next step; boycott,” wrote Tromso in a statement, becoming the first football club in the world calling for such a move.

“Tromsø IL thinks it is time for football to stop and take a few steps back. We should think about the idea of football and why so many people love our sport. The fact that corruption, modern slavery and a high number of dead workers are the basis of the most important thing we have, the World Cup, is not at all acceptable.”

On Monday, Odds Ballklubb, Norway’s oldest football club, followed in Tromso’s footsteps calling for a boycott, pointing out that dialogue has so far not achieved results. In a statement the club wrote: “Corruption, slave-like working conditions and systematic violations of human rights are as far removed from football’s idea and football’s values ​​as can be achieved.”

In 2010, FIFA awarded the World Cup to Qatar and ever since widespread concerns over human rights violations and treatment of migrant workers have not gone away. Amnesty International has since documented conditions of workers being “exploited” and “subjected to forced labor.”

The club added: “Odds Ballklubb is launching a sustainability project this spring in collaboration with private and public companies in Telemark. One of the sustainability goals is about decent work, among other things by protecting labor rights and ensuring a safe and secure working environment for all. For Odd, supporting the boycott of Qatar is therefore a natural continuation of our focus on sustainability.”