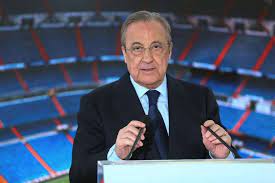 June 28 – The doomed European Super League may be past history but Real Madrid president Florentino Perez insists the ongoing court case brought by the three remaining members of the project will show the world it was not a failure and is very much alive.

Real Madrid, Barcelona and Juventus are the last remaining clubs to support  the proposals that were  launched in April but died almost overnight when the other nine withdrew amidst a huge backlash from fans, politicians and pundits.

Perez has now claimed there is “a binding contract and no one can leave”, citing the case at the European Court of Justice, via a Madrid judge, as to whether football’s existing authorities are implementing an unfair monopoly.

“We are calm, because of what we have, we have won,” Perez told the El Transistor show, adding the six English teams originally involved were coerced by FIFA and UEFA to pull out.

Perez continues to take the view that the Super League would have saved the sport at elite level and is adamant the English clubs must remain committed.

“The Super League continues. We went to the judge who made a ruling and said the Super League cannot be touched,” he said. “UEFA cannot do anything to the people or the clubs. Now the court in Luxembourg must decide.”

“We have been working on this for two years. It’s a format to prevent football, which is losing interest, from dying. A Roma-Sampdoria has less interest than a Manchester [United]-Paris Saint-Germain.”

“We want to give football to the fans. We can’t start with the fact that we are all equal. Champions League group stage matches are barely watched. The ratings only get higher in the quarter-finals, semi-finals, and finals.

“We are waiting for the court decision in Luxembourg. The Super League is not finished, on the contrary.”