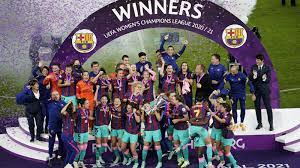 September 14 – European champions Barcelona were grouped with Arsenal, Hoffenheim and HB Køge from Denmark in the draw for the remodelled 16-team Women’s Champions League.

The group stages, a first for the competition, will be played from October to December with the top two from each group progressing to the quarterfinals, in a move away from the 32-team knockout format with UEFA elevating the status of the continent’s flagship competition with both a rebrand and increased prize money.

European debutants Real Madrid, who eliminated Manchester City in the qualifiers, Paris Saint-Germain, Breidablik and Kharkiv complete the line-up in Group B.

DAWN’s YouTube channel will stream all of the competition’s 61 matches. In May, the Women’s Champions League will reach its climax with the final in Turin.

The winner will take home more prize money than ever. Last April, UEFA announced a €24 million cash boost to clubs across Europe, a quadrupling of the previous amount paid as prize money. The governing body also said that 23% of the €24 million available via “solidarity payments” will go to women’s clubs not taking part in the tournament but whose leagues are represented in the competition.