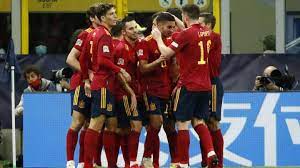 October 6 – Spain and Ferran Torres overpowered Italy 2-1 in a fluent, attacking display to end the European champions’ world-record unbeaten run of 37 games and claim a spot in the Nations League final.

Italy once again know what losing is. In the Nations League semi-final, they were outclassed and outmanoeuvred on home soil by Spain’s brilliant use of space, possession and positional play to lose their proud record which stretched back to 2018 and a defeat at the hands of the then European champions Portugal. It was also Italy’s first competitive defeat on home soil since a 3-2 loss to Denmark in 1999 in a Euro 2000 qualifier.

Spain demonstrated their strength in depth. Missing Dani Olmo, Gerard Moreno, Alvaro Morata, Pedri and Jordi Alba on a long list of injured players, their deputies, including FC Barcelona’s Gavi, Spain’s youngest ever international at the age of 17 years and 62 days, did what La Roja had done at Euro 2020 by preventing Italy from playing and dominating the game.

Gavi – “the future of the team” and “playing as if in his own backyard” according to Luis Enrique – and the Spanish team kept the ball from Italy, frustrating the hosts and coach Roberto Mancini who had vowed before the game that he wanted the ball, but admitted that at some point Italy’s unbeaten stretch was going to end. And so it did at the San Siro.

The match quickly settled down with lots of possession and deliberate passing from Spain interspersed by quick bursts and transition play from the Italians. In the 17th minute, the visitors drew first blood with a wonderful goal: Mikel Oyarzabal, once again in space in behind Italy’ full-back, delivered a pin perfect cross that was met by Ferran Torres, who let the ball drift across his body to connect, 0-1.

Italy were rattled and Marcos Alonso, the standout player in the first half with his overlap, struck the woodwork. The hosts, however, remained aggressive, in that counterintuitive and modern style that won the Squadra Euro 2020 as well as many admirers, and should have drawn level after the half-hour mark when, first, Federico Bernarderschi’s attempt from an acute angle kissed the near post and, then, Lorenzo Insigne inexplicably side-footed the ball wide.

When Bonucci was sent off for a second yellow card after elbowing Sergio Busquets in the 42nd minute, Spain were intent on not simply destroying Italy but doing so in style. The next goal, on the stroke of half-time, was another work of art, with the duo Oyarzabal-Torres responsible again for the assist and goal. This time, Torres met the number 21’s lofted half-volleyed cross to head home.

Italy never recovered.  At the best of times, it’s hard to get the ball off Spain, with a man less and two goals down, it’s almost impossible.

The European champions didn’t have a fight in them, rendering the second half largely academic. Still, the Spanish took the liberty of toying with the Italians and both Oyarzabal and Alonso failed to get a third. It almost cost Luis Enrique’s team dearly.

Italy are never truly down and out, and out of nowhere, substitute Lorenzo Pellegrini pulled one back after Chiesa robbed Pau Torres near the halfway line.

But there was to be no grandstand finish. Spain hugged the ball and, like much of the evening, Italy simply couldn’t get it back. A year before the World Cup and with the Nations League final awaiting on Sunday, Spain are showing glimpses of their potency.