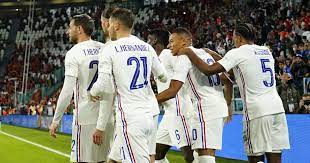 October 7 – With a phenomenal rearguard action, world champions France came from two goals down to triumph 3-2 over neighbours Belgium and book a place in the Nations League final against Spain.

In a repeat of the 2018 World Cup semi-final, France prevailed with a single goal against Belgium in the second Nations League semi-final to bounce back from their disappointing round of 16 exit at Euro 2020. From start to finish, the clash between the world champions and the world number one delivered intensity, quality and drama.

The French faced a test of character, trailing by two goals at half-time, but they proved up to the task, chasing the game and turning it round in the 90th minute when Theo Hernandez exploited another piece of dismal defending from the Belgians – Toby Alderweireld not clearing the ball – to deliver a stunning victory.

And yet, Belgium had been excellent in the first half. Playing without any inhibitions, Roberto Martinez’s team scored twice in the space of three first-half minutes when, first, Yannick Carrasco’s low strike completely wrong-footed Hugo Lloris in the 37th minute and, then, Romelu Lukaku smashed the ball past the French number one from an acute angle following a Kevin De Bruyne assist.

The Belgians disappointed at Euro 2020, exiting the tournament in the last eight, but here rekindled their form of old, seizing the initiative with an industrious De Bruyne. They pressed as a unit and enjoyed enough possession, and even if Kylian Mbappe’s speed was a menace for their shaky rearguard, Belgium were on the front foot.

The world number one showed a different face because of both the industry and intelligence of the Manchester City midfielder, who took two injections to play against Italy at the European championship and admitted regretting the decision in a recent interview.

He set up both goals to leave France rattled. Didier Deschamps didn’t make any substitutions at half-time but asked his wing-backs to play higher up the field. It led to more activity around the Belgian box and France converted their territorial dominance into a goal from Karim Benzema, who span in the box, surrounded by three Belgians, to find the bottom right corner. In the 69th minute, his Real Madrid colleague equalized from the penalty spot. Youri Tielemans kicked Antoine Griezmann’s foot in the box.

In a grandstand finish, Mbappe, who linked up well throughout the match with the formidable Benzema, spurned a glorious chance, with the Belgian defence ball-watching. On the counter, Lukaku snaffled a goal, but the striker was ruled offside. The final word, however, was for the world champions and that thunderous Hernandez strike.

De Bruyne gesticulated in agony, but his team had been steamrollered by the power and class of France’s forward line and support cast in the second half.  The Belgians failed to deal with their opponent’s high press and invited Deschamps’ XI back into the game. Again, they choked against a major opponent on the big occasion, rendering the moniker ‘golden generation’ for this crop of players impertinent.  Roberto Martinez, whose future will be questioned, said that “It is as if we have lost twice”.

“In the second half the Belgian team disappeared,” said Deschamps.  “Were they less aggressive or did we play better?” The embattled French coach can breathe a sigh of relief. His team convinced, with Mbappe a constant scourge as well as Benzema’s tenacity and lethal instinct standing out. His wing-back choice was vindicated with Hernandez’s late winner completing a stirring comeback that will lift French spirits ahead of Sunday’s blockbuster final against Spain. “We are still alive,” said Deschamps.