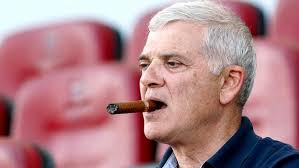 October 21 – Details are emerging of how controversial AEK Athens owner Dimitris Melissanidis allegedly misappropriated money from his now bankrupt shipping business to fund his own lavish lifestyle and the Greek club.

Melissanidis (pictured), a Greek shipping tycoon, is the founder of Aegean Marine Petroleum Network Inc (Aegean) that in November 2018 was forced to file for bankruptcy in New York after a massive accounting fraud was discovered that wrote off about $200 million of assets from its balance sheet.

The bankruptcy proceedings led to the creation in 2019 – ordered by the Southern District of New York Bankruptcy Court – of the Aegean Litigation Trust, which represents those affected by the fraud and bankruptcy and with the purpose of pursuing claims against Aegean.

Its investigations led to a claim being filed on October 1 in the Tribunal d’arrondissement de Luxembourg that details how, between 2010-2018, Melissanidis abused his dominant position within Aegean to  fraudulently syphonmillions of dollars into entities he controlled.

It was the scale of the fraud – more than €200 million – that ultimately pushed Aegean into bankruptcy.

One of the principle entities that received that money was Oiltank Engineering & Consulting Ltd (OTE), whichwas presented as  independent business but was controlled by Melissanidis. OTE received more than $35 million from Aegean with with no contracts, loan agreements or invoices to explain the payments.

AEK subsequently received over $10 million from OTE, some of it going directly to paying player and coachwages and bonuses.

The Luxembourg court submission details emails between passing between Melissanidis, AEK officials and OTE director Amelios Vrachypedis showing that between 2015 and 2018, Aegean funds were channelled through OTE to AEK to pay players and coaches and cover operating deficits. Melissanidis authorised the payments from OTE to AEK.

One email from AEK’s Financial Manager, Dimitris Patkas, to OTE’s Vrachypedis asks him to “ensure that by the end of the month of 30/9/15 the instalments for Vargas of €19,890 and for Buonanotte €23,880 will be paid.”

In another Patkas emailed Melissanidis regarding AEK’s budget to the end of the 2017 season identifying a deficit of €3.5million for the 2016/2017 season and that there would again be a €5 million deficit for the 2017/2018 season. Patkas’ proposed solution was for a potential loan from OTE “of the range of, let’s say, 5 million to cover the cash deficit.”

The investigation also alleges that Melissanidis and his associates’ misconduct included falsification of bankstatements, internal  accounting records, invoices, certificates of quantity and other documents.

During the Aegean they tried to cover up the accounting fraud via the creation of about $200 million ofsham account receivables.

While Melissanidis is also alleged to have tried to frustrate the investigation by assaulting and threatening awitness and Aegean employee who cooperated with the investigation. The employee in question went to hospital and then  into hiding for weeks fearing his safety. He also filed a police report.