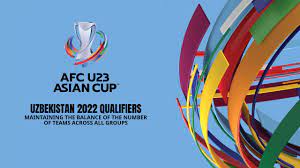 October 22 – Asia will see a return of national team age-group competition this weekend with centralised qualifiers for the AFC U23 Asian Cup Uzbekistan 2022.

Qualifiers kick off on Saturday, October 23, in centralised venues and will see matches played through to October 31.

The 39 teams have been drawn into 11 groups with 15 spots available at the AFC U23 Asian Cup 2022 with Uzbekistan having already confirmed their place as hosts, the first time the tournament will be staged in the Central Zone.

The draw divided the teams into two Regions – the West Region comprising 23 West, South and Central teams (in six groups) as well as the East Region, which consists of 16 East and ASEAN Participating Teams in five groups.

The 11 group winners and four best second-placed teams will qualify for the finals.

Qualifying match action begins in Group K between Cambodia and Hong Kong, with both nations seeking to qualify for the AFC U23 Asian Cup finals for the first time, at the J-Village (Futaba-Gun) in Japan.

October 25 sees the bulk of group action starting with the reigning champions South Korea open their campaign against the Philippines at the Jalan Besar Stadium in Singapore while centralised host Singapore face Timor-Leste at the same venue three hours.

The 2022 host Uzbekistan, whose results will not be accounted for in the Qualifiers, will begin their preparations for the finals against 2020 runners-up Saudi Arabia at the Pakhtakor Stadium in Tashkent.

In Group A host Qatar, who finished third in 2018, face Yemen at the Khalifa International Stadium before Syria take on Sri Lanka two hours later at the Suhaim bin Hamad Stadium.

In Group B, 2016 Quarter-finalist Iran open their campaign against Nepal at the Republican Central Stadium in Dushanbe while host Tajikistan follow on against Lebanon at the same venue.

Meanwhile in Group D, Bangladesh, making a first appearance in the finals, will play Kuwait at the JAR Stadium in Tashkent.