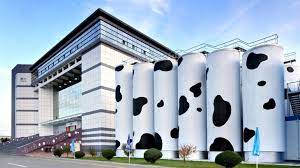 On the back of a successful partnership with FIFA for Russia 2018, the diary giant opened new talks with the world federation in 2019 and will now get a renewed opportunity to promote their brand during the quadrennial high mass of the game.

“Mengniu is committed to promoting a healthier world through nutritious products and safeguarding a sustainable planet,” said FIFA general secretary Fatma Samoura in a statement. “These values echo FIFA’s values of promoting healthy lives through football, as well as fair play.”

Last year, FIFA said that the majority of sponsorship and broadcast deals for the Qatar World Cup were already in place, allowing the governing body to achieve its revenue target of $6.44 billion for the current cycle. The World Cup remains FIFA’s golden goose. It is estimated that sponsors pay between $9 million and $23 million to associate with the tournament.

Mengniu chief executive Jeffrey Minfang Lu said: “[The agreement] builds on our successful collaboration with FIFA on at the FIFA World Cup in Russia in 2018, and sits well with our five-year plan to develop Mengniu into an international dairy leader, a nutrition and health platform, a company with its strong cultural gene and its own sustainable development mode, and a brand loved by consumers across the world.”

Alongside Vivo, Hisense and Alibaba, the diary manufacturer was among a raft of Chinese sponsors to prop up the 2018 World Cup. Since FIFAgate in 2015, Chinese partners have become more prominent on FIFA’s sponsorship roster.