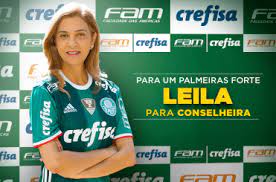 November 23 – On the eve of the Copa Libertadores final, Palmeiras have elected Leila Pereira as their new boss, the billionaire businesswoman becoming the first female president in the club’s history.

Pereira, 57, was elected president of Palmeiras unopposed until 2024. Since 2015, she has sponsored the club with bank Crefisa, pouring hundreds of millions of Reias, as outright investment or loan, into the club. In the presidential elections, she received 1,897 of the 2,141 votes to become the first woman to assume the presidency at the Sao Paulo giant.

Pereira has promised that during her presidency she will seek to deliver silverware and bring the club back closer to the fans, plans that will have been music to the ears of the fanbase.

She said: “I have two main pillars in this administration. Firstly, a more and more victorious Palmeiras at the forefront. We are already protagonists, but we want to be victorious. I don’t want second place, I want first. Let’s work for it.  And bring the fans closer to their team. It’s clear to me, this is what I’m here for, to look out for our millions of fans. Our greatest asset is outside the club. I will continue to do the work with the members but we have to look at this crowd outside the wall, give access to our club, proximity, with the possibility of buying affordable tickets, the fan being able to buy a shirt.”

The new president is the second Brazilian billionaire to be the driving force behind  a domestic club. Rubens Menin is the Mecenas of Atletico Mineiro. He is the owner of the construction company MRV, CNN Brasil and the Inter bank. Not long ago, he also acquired Radio Itatiaia, an influential radio station in Minas Gerais. With five matchdays left in the domestic league, Atletico Mineiro are on the brink of becoming the Brazilian champions.

On Saturday, Palmeiras will have their own shot at glory when they defend their South American crown in the final of the Copa Libertadores against Flamengo, but Pereira’s ascension to the throne at the Allianz Parque could signal a new age in the Brazilian game where billionaires, in the past, have always shied away from the game.