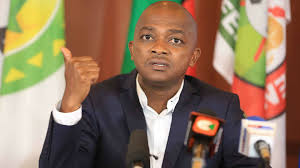 December 1 – First his federation was annulled against FIFA rules, then a legal case against him appeared to have been dropped following threats of a FIFA ban.

Now, Kenyan FA chief Nick Mwendwa has resigned after being charged with multiple counts of fraud.

In a letter to FKF’s national executive committee members, Mwendwa stated he was handing over the reins to vice president Doris Petra because he felt “personally targeted” by his arrest and the subsequent charges, which he denies.

“In light of the frequent arrests and detentions, which have adversely affected my family and personal business, and whilst I am confident I will be cleared of any wrong doing in the end, I have asked my vice president Madam Doris Petra to assume all functions of the FKF president,” Mwendwa wrote.

“My decision has been arrived at with the federation’s best interest at heart.”

In a complicated scenario, the FKF announced last week that a legal case against Mwendwa was over after the state failed to provide any evidence against him. However, Kenyan police later clarified that it was not the fraud case which had been closed.

On Monday Mwendwa pleaded not guilty to four counts of fraud at an anti-corruption court in Nairobi, having been re-arrested. He and others are accused of embezzling about 38m Kenyan shillings ($337,700, £254,500). Mwendwa, who had been head of the FKF since 2016, is currently out on bail as he awaits trial.

It remains to be seen how FIFA reacts after directing the government to immediately reinstate Mwendwa after his first arrest.

His lawyer Eric Mutua wrote a protest letter to the Inspector General of Police (IG), Director of Public Prosecution and the DCI over the circumstances of his detention.

“The arrest of Mwendwa is a clear manifestation of abuse of both police powers and criminal justice system, whose ultimate aim is to intimidate Mwendwa in order for him to abandon his pursuit of a civil dispute over management of Football Kenya Federation,” Mutua wrote.