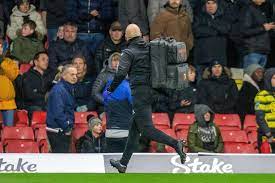 Chelsea’s clash at Watford was halted on 13 minutes while the start of the second half between Southampton and Leicester was also held up.

Chelsea and Watford players were taken off the field by the referee after play was stopped. Chelsea defender Marcos Alonso appeared to alert the referee and medical staff rushed to assist the supporter, who was stabilised and then carried out on a stretcher to be taken to an adjacent nearby hospital.

The score was 0-0 at the time, and play resumed around 30 minutes later.

Later on Wednesday, the second half at Southampton was also delayed.

The incidents follow a similar situation on October 17 when  a match between Newcastle and Tottenham was halted for 20 minutes when a spectator suffered cardiac arrest.