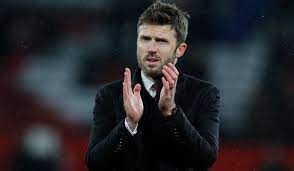 December 3 – Michael Carrick has left Manchester United following a brief stint as caretaker manager since the sacking of Ole Gunnar Solskjaer on November 21.

Carrick had a an unbeaten three-match stint but United announced he was leaving minutes after the 3-2 win over Arsenal on Thursday.

Effectively that meant he was not wanted as part of the new coaching staff under Ralf Rangnick who has been named interim manager until the end of the season with the German’s first game in charge against Crystal Palace on Sunday.

Carrick, however, insisted he made the call.

“It is 100 per cent my decision. I respect a new manager coming in. I made the decision before speaking to him. It wasn’t an easy one but [it is the] right decision for the club.

“The loyalty to Ole is a little bit of a factor but there were a lot of things that came into my decision. I was conscious of making my decision before any real conversations with Ralf. I wanted to be clear-cut. It was nothing personal at all.”

Carrick played for United from 2006-18, making 464 appearances and winning the Premier League five times as well as the Champions League, then became part of the coaching staff under first Jose Mourinho then Solskjaer.

John Murtough, United’s football director, commented: “We are grateful for the steady leadership Michael has shown through this period of managerial transition.”