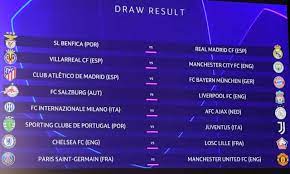 December 13 – There was no question about the match-up of the round when the draw was made today for the last 16 of the Champions League – only for the entire process to be declared null and void minutes later in a major embarrassment for UEFA.

Manchester United were drawn to play Paris St. Germain, a mouth-watering tie on so many levels, not least pitting Cristiano Ronaldo against Lionel Messi.

PSG coach Mauricio Pochettino, whose side has never won the trophy, has recently been touted as the next long-term United manager and the tie has all the ingredients of a classic encounter.

But after the initial excitement, the draw will be redone in its entirely later this afternoon after Uefa put out a brief statement.

“Following a technical problem with the software of an external service provider that instructs the officials as to which teams are eligible to play each other, a material error occurred in the draw for the UEFA Champions League Round of 16,” said Uefa. “As a result of this, the draw has been declared void and will be entirely redone at 1500 CET.”

Holders Chelsea, who could have faced Bayern or Ajax, seemed to have got the luck of the draw and will have been relieved to have been paired with Lille. But that could now well change –  along with every other pairing – when the process is repeated.

This was the original draw:

The rules of the draw state that no two clubs from the same country could be drawn against each other, nor could two clubs that had faced each other in the group stages, meaning United should have avoided Group F opponents Villarreal.

However, Andrey Arshavin, who was helping make the draw alongside UEFA head of club competitions Michael Heselschwerdt and UEFA deputy general secretary Giorgio Marchetti, pulled United out of the club pot to be paired with Villarreal.

After that error, Villarreal were then drawn against Manchester City after Arshavin was instructed to find fresh opponents for the Spanish side.

It appears United’s ball was not put back into the correct pot, which would have seen them in the mix to be drawn against Spanish giants Atletico Madrid, who were the next club pulled from the bowl and drawn against Bayern Munich.