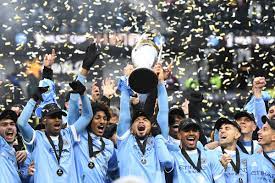 All the titles held by the UAE-owned group are in men’s football. CFG currently owns 10 clubs around the world, with six playing in their country’s top tier league.

It took a penalty shoot-out for NYFC to win their MLS Cup title, the culmination of the end of season play-off series for the top teams from the east and west conferences.

NYFC took the lead on 41 minutes with a goal by Valentín Castellanos, the winner of the 2021 MLS Golden Boot. That goal looked to be enough to seal the title until four minutes into second-half stoppage time Felipe Mora scored the equaliser, and taking the game into extra time before a 21,218 sellout crowd at Providence Park in Portland.

The scores remained at 1-1, with NYCFC going on to win the penalty shootout 4-2.

NYCFC have only been playing since 2015 and now have their first title. They have qualified for MLS playoffs the last six consecutive seasons and in 2019 finished at the top of the Eastern Conference.

They also qualified for the 2020 CONCACAF Champions League.