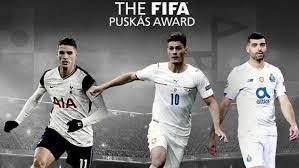 January 5 – Erik Lamela’s remarkable rabona for Tottenham Hotspur in last season’s north London derby against Arsenal, Patrik Schick’s long-distance screamer at the Euros and Mehdi Taremi’s overhead kick against Chelsea have been nominated for FIFA’s annual Puskas award for the best goal of 2021.

Lamela, who last summer signed for Spanish side Sevilla, follows in the footsteps of another Spurs player, Son Heung-min, who won the 2020 prize for his individual goal against Burnley.

The Argentine is up against Bayern Leverkusen’s Czech Republic striker Schick, who scored with a magnificent effort against Scotland at Euro 2020. The strike was voted Goal of the Tournament but could yet win yet a second award yet if it receives the most votes later this month.

The winner will be announced on January 17 during The Best FIFA Football Awards taking place in Zurich.