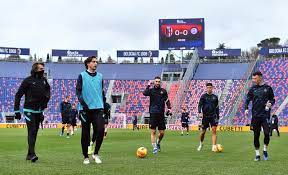 January 7 – Yet another high-profile Italian fixture has descended into farce because of Covid-19 with Inter Milan’s game at Bologna called off even though the visitors had turned up to play.

Bologna’s rising Covid cases led to them being put into quarantine but since Serie A has refused to cancel matches, Inter still had to travel.

The visitors, who walked off the pitch when it became clear Bologna were unable to fulfil the fixture, will be awarded a 3-0 victory if the rules are followed pending any appeal by Bologna.

However, Inter director Beppe Marotta said the system of health authorities deciding if games could be played is not working.

“The situation is chaotic,” Marotta told Sky Sport Italia. “Games have been postponed by local health authorities who decided independently.

“Bologna were ready to play and they suffered the situation from ASL (health authority) which have taken this decision to protect everyone’s health, but clarity is missing. I would limit the ASL’s power otherwise, we’ll always face similar situations in the future.”

Altogether four games did not take place on Thursday because of rising cases. Bottom side Salernitana were due face Venezia but their local health authority forced the squad into a five-day quarantine.

Udinese and Torino had also been placed in isolation and blocked from travelling to Fiorentina and Atalanta respectively.

Serie A later released a further statement in which it said: “The hope is that the ASL no longer intervene with confused and inconsistent measures which, at the moment, are creating serious damage to the Italian sports system.”