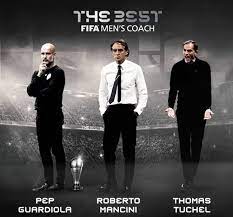 January 10 – Manchester City’s Pep Guardiola, Chelsea’s Thomas Tuchel  and  Italy manager Roberto Mancini are on the shortlist for FIFA’s best men’s coach of the year with  the winner to be announced on January 17.

Guardiola is up for the award after guiding Manchester City to their third Premier League title since he took over as manager back in 2016.

But he seems likely to miss out to either Tuchel, who beat City in the all-English Champions League final, or Mancini who led Italy to glory at Euro 2020.

In what is a European-dominated shortlist FIFA has also announced the contenders for the Best Women’s Coach with Barcelona’s Lluis Cortes and Chelsea’s Emma Hayes joining current England coach Sarina Wiegman who led the Netherlands to the 2017 Euro title.

The two awards are voted for by an international jury comprising current managers of all women’s/men’s national teams, captains of each squad, one specialist journalist from each territory represented by a national team and fans registered on FIFA’s website.