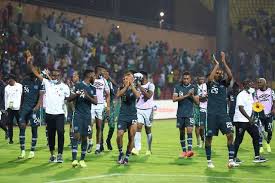 January 12 – Nigeria kept Egypt and Mohamed Salah in check to take control of Group C at the Africa Cup of Nations and reverse their fortunes following an acrimonious build-up to the tournament.

Hosts Cameroon, defending champions Algeria and favourites Senegal all failed to impress in their first matches of the continental finals, but on Tuesday the Super Eagles of Nigeria took a flying start with an impressive all-round display and commanding victory against Egypt and Liverpool star Salah. Leicester City’s Kelechi Iheanacho sumptuous strike in the 30th minutes was enough to sink Carlos Queiroz’s team.

“I gave the players freedom. I told them… be free and enjoy yourself,” said Nigeria coach Augustine Eguavoen. “Try to keep Salah off the ball and play high-pressure football at the other end.”

Few had however given his team much of a chance against Egypt. Eguavoen is leading the Nigerians on an interim basis after Gernot Rohr was dismissed in December. The German was punished for a string of disappointing performances in World Cup qualifying, but his successor, the Portuguese José Peseiro, has been restricted to an observer role in Cameroon.

To compound matters, the Nigerians are also missing key personnel:  Odion Ighalo, Victor Osimhen and Emmanuel Dennis are all absent from the frontline. Even so, Eguavoen’s team restricted Salah to a peripheral role. In the second half, the Egyptian star got one major opportunity, but he failed to capitalise. By then, Egypt had fallen behind and Salah, up top, was too isolated from the rest of his team.

Earlier on Tuesday, Algeria’s profligacy cost the reigning champions two points against Sierra Leone, who returned to the finals for the first time in 26 years. On an unbeaten run of 33 matches, the Algerians failed to break down the opposing defence, marshalled by former England international Steven Caulker. He switched his international allegiance and proved to be instrumental, alongside goalkeeper Mohamed Kamara, to keep the Algerian attack at bay.

Kamara produced a number of crucial saves, contributing to his country’s hard-earned point and the low scores at the tournament. Cameroon edged Burkina Faso 2-1 in the tournament’s curtain-raiser, but since then no match has seen more than a single goal with six 1-0 results and two goalless draws, leading to just nine goals scored in as many matches.

On Wednesday, the last six teams in the tournament take to the field with Mali and Tunisia featuring in the blockbuster match of the day.