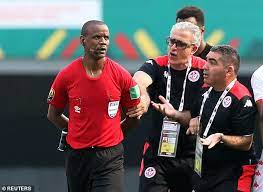 January 13 – Chaos dominated the Africa Cup of Nations on Wednesday:  Zambian referee Janny Sikazwe was guilty of poor time-keeping during Mali vs Tunisia and in the city of Bua, the basecamp of both Mali and Gambia, a gun battle between rebel forces and government soldiers broke out, raising security concerns.

Sikawze first blew the full-time whistle on 85 minutes before ending the match with the clock showing 89 minutes and 47 seconds and before any added time could be played. In between, he sent off Mali substitute El Bilal Touré for a rash challenge, but his bizarre actions condemned the Tunisians to a 1-0 defeat in the Group F opener.

Reacting with disbelief, Tunisia coach Mondher Kebaier and his technical staff stormed the field to protest. Security personnel escorted Sikazwe from the field. However, tournament organisers then ordered the match to be restarted.  The Malians returned to the pitch, but their opponents remained in the dressing room.

“The players were taking ice baths for 35 minutes before they were called back out again. I’ve been coaching for a long time never seen anything like it,” said Kebaier at a news conference. “Even the 4th referee was preparing to lift the board and then the whistle was blown.”

“Very tough to manage non-sporting affairs. At the 85th minute, he blows the final whistle.  Again at the 89th minute. There was supposed to be 7-8 minutes of additional time. His decision is inexplicable.”

CAF said that “it is gathering all the necessary reports from the officials at the match” and “is forwarding these documents to the competent bodies of CAF. At this stage, CAF is not in a position to make further comment until the responsible bodies indicate the way forward.”

Sikazwe led two group-stage games at the 2018 World Cup in Russia, but that same year the Confederation of African Football (CAF) provisionally suspended him after being accused of match-fixing in the Champions League semi-final match between Tunisia’s Esperance and Angola’s Premeiro Agusto.

The Malians celebrated a precious 1-0 victory that suggests the team can be one of the tournament’s dark horses, but the delegation has concerns off the pitch. Cameroon’s news agency reported two casualties in fighting between rebel forces and government soldiers in the city of Bua, where both Mali and Gambia are based.

A video on social media showed armed men roaming the streets with gunshots fired.  The fighting is a part of a breakaway bid by the ‘Ambazonia’ rebels from Francophone-dominated Cameroon.

The day’s two other matches also ended 1-0: Max Gradel’s fine strike was enough for Ivory Coast to see off Equatorial Guinea 1-0 and Ablie Jallow’s brilliant goal led debutants Gambia to their first-ever win and three points at the Africa Cup of Nations against Mauritania.

Nine out of the 12 matches so far have ended with a 1-0 scoreline in the low-scoring tournament.

The lack of goals aside, the dramatic refereeing by Sikazwe and security concerns in Bua will test organisers’ resolve and the words of CAF boss Patrice Motsepe who said that “we set very high standards for ourselves and that is why we said that we want this Africa Cup of Nations to be the best” in his address before the opening match last Sunday.