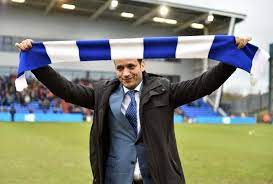 January 13 – The owner of the bottom team in the entire English professional league pyramid, Oldham Athletic, says he has been sent threats and bullets through the post.

Abdallah Lemsagam says he now wants to sell the League Two club and was speaking to “credible bidders”.

He said the handwritten threats were sent to the club’s ground addressed to him and his brother Mohamed Lemsagam, Oldham’s sporting director.

Oldham, known as the Latics, were founder members of the Premier League in 1992 but were relegated two years later and then dropped into League One. The club ended a 21-season-long stay in the third tier with ignominious relegation to League Two in 2018 and are currently managerless.

Lemsagam, a Moroccan former football agent, purchased the club in January 2018. Protests against his ownership have increased this season with the club in its worst ever position despite a fan base well above League Two level.