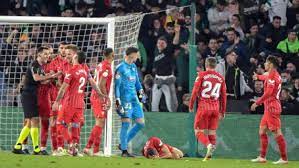 January 17 – A Spanish cup game between fierce city rivals Sevilla and Real Betis was abandoned on Saturday after Sevilla’s Joan Jordan was struck on the head by an object thrown from the stands and collapsed to the ground.

The match resumed on Sunday behind closed doors from the 39th minute – the moment at which it was abandoned – and Real Betis reached the quarter-finals with a late winner.

In contrast, Saturday’s fixture was watched by 55,000 fans and after the incident Sevilla condemned the “violent attack” on Jordan who was taken to hospital for assessment but thankfully not seriously hurt.

Real Betis also condemned the incident, saying the club had “immediately cooperated with the police to identify the alleged perpetrator”.