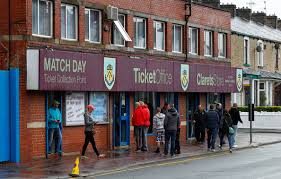 January 18 – Burnley vs Leicester has become the latest Premier League game to be postponed because of Covid-19 and injuries among home players.

Premier League rules dictate that a club must play a game if they have 13 outfield players and one goalkeeper available. It’s the 20th top-flight game to be postponed this season because of Covid.

Burnley had requested postponement with manager Sean Dyche explaining that only 10 first-team players were in training. It will be the fourth league fixture that Dyche’s side must now reschedule.

It was however the first time that Burnley had asked to postpone a match. Last month, Burnley’s matches against  Watford, Aston Villa and Everton were all postponed because of Covid-19 infections within the opposition camps.

At the football of the table, Burnley have now played just 17 matches, the fewest number of games of all Premier League clubs this season. The match with Watford was rescheduled to January 18, but that fixture could be in doubt again.

“The board assesses applications to postpone matches on a case-by-case basis, based on existing rules and adapted Covid-19 postponement guidance, implemented in light of the new Omicron variant,” said a Premier League statement.

“The board will assess a number of factors, including the ability of a club to field a team; the status, severity and potential impact of the Covid-19 outbreak at the club; and the ability of the players to safely prepare for and play the match.”

However, the Premier League’s decision to postpone the London derby between Arsenal and Tottenham this weekend caused controversy as there was reportedly just one coronavirus case in the Arsenal squad.

Southampton manager Ralph Hasenhuttl has warned that the Premier League “have opened the door and you cannot be surprised that someone is walking through now”. He said that the league “has to handle this.”