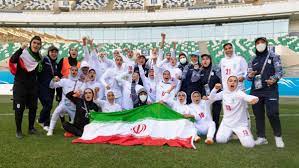 January 25 – With Japan, Korea and China having booked quarter final places at the Asian Women’s Cup in India, and Australia pretty much nailed on to join them, focus is on the remaining second and third placed slots.

Tournament newcomers Iran have the opportunity to make a mark for women in a country where restrictions on their attendance at men’s matches have made more international news than women actually playing the game.

Iran opened their campaign with a 0-0 draw against India who were subsequently withdrawn from the competition following a covid outbreak in their camp.

This has left an intriguing tie against Chinese Taipei in a group play-off for second place. A draw would see Iran come third on the group on goal difference but could still leave them with an outside chance of taking one of the two best third placed slots for the quarter finals.

Iran’s women are conscious they have the potential of making history for their country and changing perception. But the 7-0 loss to China was a hard lesson in international football.

“It was a very tough game, but my players tried hard until the last minute,” said Iran head coach Maryam Irandoost. “We have seen, even in the men’s World Cup, some great teams can concede seven goals. It’s the first time we’ve participated in this tournament, and it is a great experience for us.

“After the final whistle I gathered my players and told them we had finished that match. I told the players to promise me that they would put it behind them. We have two training sessions left, and we will shift our focus towards the Chinese Taipei match and be prepared for it.”

Iran held their own against China before conceding the opener in the 28th minute to the eight-time AFC champions. What they do need to do is to get on the score sheet with their first goal of the tournament.

“Looking ahead, I believe we can make some improvements for our next match. I’m sure the players will be eager to show what they are capable of,” Irandoost told the-AFC.com.