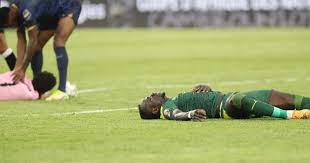 January 26 – Liverpool’s Sadio Mane suffered a head injury during Senegal’s last-16 match with Cape Verde in the Africa Cup of Nations but still scored in a 2-0 victory before he was taken off.

The incident will raise questions over concussion protocols at Africa’s flagship tournament and renew club concerns over how player health is being managed by national teams.

Mane set the Lions of Terenga on the way to the last eight when his shot curled in off the underside of the crossbar in the 63rd minute, but following the goal celebrations, he went to the ground. He was then substituted.

He had looked dazed after a clash of heads with Cape Verde goalkeeper Vozinha, who staggered around before being taken off. He was then dismissed while receiving medical attention on the touchline. Mane however played on and remained on the pitch for another 16 minutes.

Senegal coach Aliou Cisse said Mane had been taken to hospital following the game. “He felt faint, his head was spinning and he had to go there,” said Cisse.

The Liverpool player posted a photo on Instagram with Vozinha and wrote that he was doing well. Last year, the International Football Association Board (IFAB) introduced permanent concussion substitutions following consultation with medical experts and national associations.

It is the latest incident in a lengthening list of incidents that are casting a shadow over the Africa Cup of Nations.

Referee Janny Sikazwe blew the whistle twice before the 90 minutes in the group-stage match Mali – Tunisia. Poor pitches and low attendances also blighted the first round. On Monday, eight fans died at a crush outside the Olembe Stadium at the last-16 tie between Cameroon vs Comoros, prompting both the local authorities and the Confederation of African Football (CAF) to launch investigations.

Senegal went on to win the match 2-0 with Cape Verde ultimately reduced to ten men. They will face the winner of Mali vs Equatorial Guinea in the last eight. On Wednesday, Ivory Coast and Egypt face off for the last ticket to the quarter-finals.