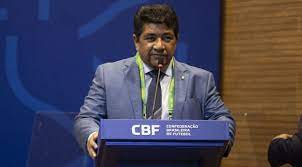 March 24 – Brazilian football has a new boss. After rudderless months, Ednaldo Rodrigues has been elected the new president of the Confederation of Brazilian Football (CBF) for a four-year term.

Rodrigues was the only candidate in the elections and received 137 of 141 possible votes, even if a judge in Maceio had suspended the elections following an appeal from Gustavo Feijó, a former CBF vice-president.

Rodrigues, 68, will serve as the CBF president until March 2026 and will then be allowed to stand for re-election.

“It was not an easy process, nine months of injustices, infamies,” said Ednaldo. “And today democracy won. I spent the whole time defending myself, especially from prejudice. Everyone knows about my life, I have an unblemished character.

“In the last few months, I have suffered all kinds of pressure, prejudice, I have had my phones tapped, my e-mails violated, the e-mail of the CBF presidency’s office also violated. And prejudices that still exist in all segments of society because I’m from the Northeast, because I’m from Bahia, because I’m from the interior, from Vitória da Conquista and that I’m proud to be a son. Prejudice for being black. This is the great reality, the great answer.”

A former president of the football federation of Bahia, Rodrigues served as one of eight vice-presidents under Rogerio Caboclo, who exited the CBF last month following longstanding allegations of sexual harassment.  Caboclo had been suspended ever since the allegations emerged on the eve of the last Copa America.

“When we took over the entity on an interim basis, it was a vessel in a storm,” said Ednaldo. “I had to hold the helm. Now, starting from the democracy here, I want to correct the course. Do your best, what is legal, and purge any and all immorality that has ever happened.”

As an interim president, however, Ednaldo Rodrigues allowed for an increase in the salaries of presidents of the state federations, who make up the majority of the CBF’s electoral college and thus the governing body’s power base. Some presidents have earned €160,000 euros or more a year.